A Writer’s Twelve Days of Christmas

On the first day of Christmas, my karma brought to me:

A manuscript in a mad tangle

I’m grateful to have a complete first draft. Really. But the tangle starts on page 2.

It’s not that I’m a plagiarist. It’s just that my memory gland is too strong for my imaginary gland.

I don’t use them myself. So where are my characters getting them?

Such adorable turns of phrase! Why do my readers get that gag-me-with-a-Smurf expression?

Once, you got a litter of crumpled paper on the floor, signifying writerly despair. Now it’s just delete…delete…delete….

I rely on their advice. And there’s so much of it! But I like to share my toys.

My protagonist knocks back Scotch. F. Scott Fitzgerald was drunk more than he was sober. Why do I have to stick to coffee?

I should be so lucky.

Last week I left the same corpse in two places at once.

See Eight and Nine above.

I think I passed a milestone this week.

It wasn’t literally my first rewrite of a scene. My writing group would never let me get away with that. All kinds of changes have rippled through my manuscript, usually to remedy total howlers in the plot, but also to remove unlikely remarks by a character or make my subplots more like a braid and less like railroad tracks.

This week is the first time I forced myself to abandon a scene totally and write another to do the same work in the book, better. Be warned: it hurts. 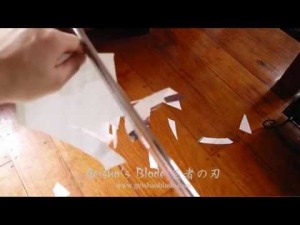 If only my red pencil were as sharp as the Geisha’s blade!
(Geisha’s Blade Philippines Samurai Sword Shop)

Two criticisms forced me to it. Our group’s homicide detective told me that interviews of witnesses would never be conducted with other witnesses present. You isolate them and get each one to tell her own story. Even weightier, there was a sad consensus that ‘it all went on too long.’

Even I could feel the latter problem. While I never used the dread locution, ‘and then,’ I might as well have. On plodded the scene, until slept the mind. I resolved on surgery.

I work in the Scrivener writing program. It’s hugely useful, letting you switch from any scene to any other with a single click, showing links to notes, outlines and subplots on the main page. Unhappily, that makes it so easy to tick back into your original draft, to tinker with it instead of starting fresh, to cheat by leaving your new text to lift just one or two sentences – such clever prose! – from the old.

Somehow, this time, I realized that I had to resist. I stayed with the blank white screen of the new version. When I needed to analyze the old scene for necessary information, I did it in longhand on a yellow pad. I changed the location of the scene, narrowed the point of view, pushed beloved characters into the background.

Lo and behold, it worked. When I checked back with my yellow pad, I found that the new scene did all that the old did, more briskly, with more conflict in the present and more tension about what is to come. The new scene is 25% shorter.

The exercise wasn’t without losses. On my yellow pad, I had drawn two columns: Needed and Good. The latter listed five brief passages in the original scene, a few words or a sentence or two at most, which I liked very much. Four of them showed characters acting characteristically. When I had forced my way through the new scene, these vignettes were gone. The course of action just didn’t allow them to happen.

Were they darlings? I still don’t think so. I’ve stored them in a file called ‘fragments’ for possible reinsertion in a final smoothing. Deep in my heart, though, I don’t expect to see them again.