← Other Kinds of Craftsmanship
AN APPROPRIATE TIME →

My road down the path to becoming a genealogy junkie started innocently enough, as I imagine it does for many addicts. (See my blog post of September 13, 2016, A Pilgrim in the Family.) My husband’s family is my drug of choice.

When my research revealed that Bailey Clough, my husband’s fourth great-grandfather, of Lyman, NH, fathered Helen Luella Clough at the age of sixty-nine, I knew I had some digging to do. I located Historical Sketches of Lyman New Hampshire, written by E. B. Hoskins and published by Charles P. Hibbard in Lisbon, NH, in 1903. 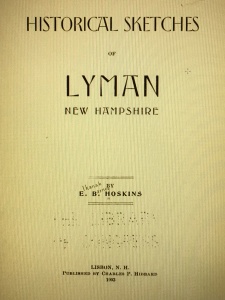 If these sketches are brief and contain little of deep interest, it is because Lyman is a small farming town, and its history has been quiet and peaceful, with no events of a remarkable character.

I smiled when I read this. It is how I envision Woodbury, NH, home to Gabby, Anne, Olivia, Em, Lexi Rae, Claire, Louise. Nothing has happened here of a remarkable nature. Until now.

Finally, on page sixty, I found the Clough family: William Clough served in the French and Indian war three years, was captured by the foe and carried to France, where he was kept a year or more. He entered the Revolution without enlistment, and was at the battle of Bunker Hill. His children were, namely: Zacheus, Enoch, Bailey, Cyrus, Abner, Jeremiah, Elizabeth, and Dorcas.

Aha. Bailey had a son with the same name. And Helen isn’t listed among the offspring of Bailey Senior. The son must be the father. If the children are listed in order of birth date, which the author generally did, then Bailey would have been born after 1822. As Helen was born in 1838 or 1839 or even 1841 (I think she lied about her age so that she wouldn’t appear to be ten years older than her second husband), it’s hard to believe that her father was the younger Bailey.

I scanned all of the biographies in the history hoping to find something to link Bailey Clough, senior or junior, and the daughter, Helen, and the wife, Lydia. Nothing there, nothing in Ancestry.com, nothing in Find A Grave, nothing in Wikitree. I can’t believe I’ve reached a dead end in the nineteenth century.

I’m mentally exhausted. And ready for a trip to another cemetery!!

PS After writing this post I was itching to resolve the Bailey Senior/Junior mystery. I returned to Ancestry.com and looked at some other family histories (the least reliable source of information) that I had ignored earlier. Some more research and I am closer to saying that Junior was married to Lydia Stevens and was the father of not just Helen Luella but also Martha Ella. (And I get complaints about the names of my characters!) Bailey Junior was born in 1817, making him old enough to be Helen’s father. He died around the time that Martha was born so it is conceivable that Helen went to live with relatives, as the 1850 census shows her living with an eighty-year old Bailey Clough and possibly her aunt and uncle.

Mystery almost solved…now to get to work on my own mystery.

A contemporary fiction and domestic suspense writer with an accumulation of incomplete novels and short stories, I spend half the year in NH with our youngest daughter and family and the remainder of the year in Arizona with our other two daughters and their families. This arrangement allows my husband to golf year-round. I am fortunate that my daughters live in places I would have retired to all on my own!
View all posts by Karen Whalen »

← Other Kinds of Craftsmanship
AN APPROPRIATE TIME →