It’s still winter in Orford, New Hampshire    — if you don’t look down

I started out with the idea of a novel set in rural New Hampshire. There’s no such thing as a novel set in New Hampshire that excludes the weather. I decided to spread the plot out over a year – up here, you can’t leave out a single month and still cover the territory.

Fate gave me a freebie: the full-year idea fit well with a problem my protagonist faces. She’s stuck at home, probably for good, after years of regular escapes to Kenya.

Today’s weather reminds me of why I changed my plan.

Last fall was lovely. Dampish now and then, but the beeches, oaks and maples all came through with October fireworks in yellow, red and russet. Winter sidled in with a little snow but then appeared to give up. Open ground could be seen in January and February. We had a storm or two, sure, storms that people in D.C. would call blizzards. But nothing you’d mention. Nothing we would, anyway.

Snow gone at the end of February. Temperatures scaling toward 60 every now and then. And then… BWAH-HA-HA-HA-HA!

And from the back door….

Arrives the blizzard that breaks the records. With nine days to go till spring, parts of New Hampshire got more snow in a single day than at any time since Cain discovered writing. (He wrote crime fiction.)

Now we’re back up to March’s ordinary 40-degree highs, on one day out of two anyway. And today is the kind of day I’ll end my novel on. I could stretch it all the way around the calendar, ending on a June day of glorious sun, leaving out the black flies. Or I could end on a July day of glorious sun, leaving out the deer flies and the humidity. But no. My heroine will triumph on the first day of Mud Season. 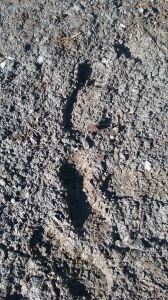 The frost goes deep here. Even calling it “frost” is misleading. It’s a rock-hard layer of frozen earth that can go down five feet. We like it. Foresters can work in the woods all winter with heavy, heavy equipment.

But when the warmth creeps back, the ground unfreezes from the top first. The layers farther down don’t feel a thing. They don’t absorb moisture, either. So for weeks, meltwater mixes with topsoil and sloshes around — and slides and squishes and slops — on that impervious surface. This is Mud Season.

I took the dog out this morning. Winter is still mounded to either side of our forest road. You can’t walk over the plow piles because you’ll go straight down in and never get out again. The road, though, is all spring, from the surface to about two inches down. This new-born world is gluey, gritty, rich and brown. Runnels of melt water dig channels on the slightest slope. A blazing sun picks out sparkly grains of marble in the 3-inch gravel that is trying to hold the our forest roads in place against strong odds. 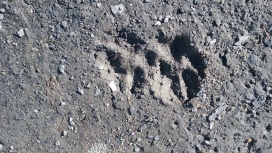 Dog prints, coming soon to a clean floor near me.

Pfeffernuss the dog is a 90-pound black Lab with feet almost as webbed as a duck’s. They sprea-a-ad out under her weight and then snap back into place like little backhoes, storing up hours-worth of pawprints for my floor tiles.

My knee-high muck boots go so deep you’d think “muck” is what they’re made of, not what they cope with. The sound they make on the upstroke is indelicate, nay, carnal.

This is what resurrection looks like in New Hampshire. The delicate blossoms and tender grasses come later, as an afterthought. When Mud Season arrives, you know you have come through the dark night of the New Hampshire soul and back out into the light.