← It’s November!
The places that November will take me →

On the “smart” front, I call in evidence Cheryl Hollon, formerly an engineer who constructed flight simulators all over the world, now full-time writer of the Webb’s Glass Shop mystery series. Sarah Wisseman was there, too. She’s a former archaeologist, who’s just started her second series of archaeological mysteries, this one starring an art conservator in Siena (Burnt Siena.) My table mates at lunches and dinners included more archaeologists, an anthropologist, a lawyer….

And funny! International guest of honor Simon Brett gave an after-dinner speech that was even better than the chocolatey dessert.

I won’t steal too many of his jokes, but here’s a taste:

In a British accent even plummier than his own, he read excerpts from Jane Austen’s only attempt to write a pornographic novel, Sense and Sensuality. (It began, “It is a truth universally acknowledged…” I leave the rest to the reader as an exercise.)

He plundered T. S. Eliot’s business correspondence and came up with a letter to an overdrawn bank customer, beginning, “Dear Mr. Prufrock….”

Dylan Thomas’s Welsh accent sounded from the grave in an excerpt from Under Murder Wood.

We heard some of the latest Scandinavian Noir, The Girl with the Unpronounceable Name, apparently read by the Muppets’ Swedish chef: “The inspector brooded…  …. … Then he brooded some more.”

Brett had a few sharp words for the clichés of our genre, too. My favorite: “Writing about serial killers is a lot easier than making up a proper plot.” The hard-as-nails, gorgeous female pathologist came in for heavy criticism, accompanied by Brett-produced sound effects: a liver squishing and a bone saw. 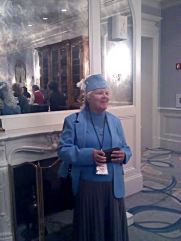 And here’s Monica again in the hat (not one of Angie’s) that she wore at the final panel. With her is Michael Dymmoch, author of the John Thinnes/Jack Caleb mystery series, and wearer of dragons. 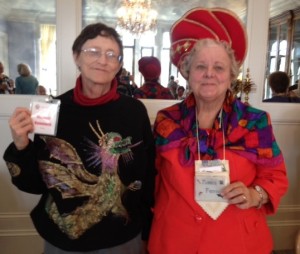 Michael Dymmoch with dragon and Monica Ferris with hat.

All right, I suppose we should do some work here. Some of the writing and publishing tips I collected at Magna included:

Now that publishers do so little and ask so much of writers, a small publisher with a smaller list may put more resources into getting your book known.

Small-town gossip is always a good way to convey information to a reader, but to judge from audience response at one panel, people enjoy reading it for its own sake. Similarly, most of one Q&A was taken up with anecdotes of interesting overheard remarks.

The last impression made by your final scene is what determines whether the reader will buy the next book in your series.

Sally Wright, author of both the Ben Wright and the Jo Grant series, outlines before she writes…and outlines, and outlines…. Sometimes, she goes on for fifty pages before writing the first sentence of the text.

From Sarah Wisseman: have your protagonist miss a clue because of a crisis in her personal life.

And now I suppose, as Willem Lange says, “I gotta get back to work.”

Posted on November 6, 2015, in Uncategorized. Bookmark the permalink. 2 Comments.

← It’s November!
The places that November will take me →